An Overview of a Conciliation in a Massachusetts Workers’ Compensation Claim 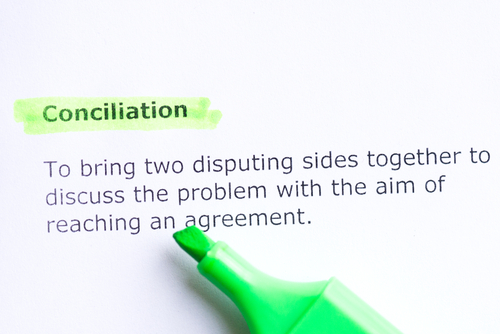 When a worker in Massachusetts is injured on the job and the injury prevents them from working, they are entitled to certain benefits from their employer’s workers' compensation insurance carrier. If the insurance company denies the claim or does not respond within the specific timeframe following the accident or first date of disability, the injured employee can file a claim.

Once the claim is filed, the employee’s claim for benefits will follow the usual process of a Massachusetts workers’ compensation case. The first step after filing the claim is the scheduled Conciliation.

What is a Conciliation?

Does the Injured Worker Need to Appear at the Conciliation?

What Needs to be Filed at a Conciliation?

When an employee or his or her attorney appears at a conciliation on the employee’s claim for benefits, there are certain documents that must be presented or filed. In cases where the workers’ compensation insurer has denied or is contesting liability and the employee has filed a claim for benefits, the injured employee or his or her counsel must present relevant medical records to the DIA or conciliator.

Generally, the injured employee or his or her counsel must present relevant medical records that establish the history of the injury, the nature and causation of the injury and the injured employee’s ability to work. When a claim is filed soon after the work accident and injury, there is typically not a lot of medical records. In situations where an employee was transported to an emergency room by ambulance after a work-related accident, the ambulance report and emergency room records are usually sufficient for the purposes of a conciliation.

What Happens After a Conciliation?

As stated above, the conciliator will hear from both sides and try to help the parties come to some sort of a voluntary agreement. If the conciliator is unable to get the parties to agree, the issues of the claim are clarified and the case will be referred to an administrative judge for the purposes of a conference.

The conciliator will provide the administrative judge with a report that outlines the issues in dispute and recommendations on whether weekly compensation or other benefits should be paid or not. This is why conciliations are important even if they are not able to get the parties to some agreement on the claim.

Have you Been Hurt on the Job and the Insurer Denied your Claim?

If you have been injured at work and you are not receiving workers’ compensation benefits or the insurer has denied your claim, feel free to contact us today either on-line or call us at (508) 879-3500.  We focus our legal practice on representing injured workers in workers' compensation cases in Massachusetts. We will explain what benefits you are entitled to and help you get the benefits you deserve.