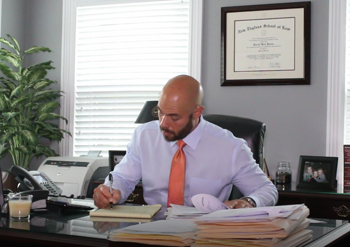 Charles S. Pappas (Chuck) is an aggressive and energetic lawyer specializing in personal injury law, and workers' compensation claims throughout Massachusetts. He has earned a tremendous reputation for not only being knowledgeable, prepared and aggressive in and out of the courtroom, but for getting the results clients want.

Its Chuck's trial and courtroom experience that offers his clients quality legal representation. Chuck has always been a litigator. Throughout his career, he has handled and tried a wide range of state and federal civil and criminal cases in courts all over Massachusetts, from Boston to Worcester. In civil court, Chuck has litigated and tried numerous personal injury cases and other civil matters. A case he handled was featured in The Verdict Reporter for his successful representation of his client in Worcester Superior Court.

Additionally, Attorney Pappas has successfully tried and litigated countless serious criminal cases in local District Courts and Superior Courts including attempted murder, OUI (drunk driving), firearm and drug cases, shootings, and other violent and non-violent felonies and misdemeanors. It is the trial experience in these cases and others that he gained early in his career that sharpened his skills as a litigator and negotiator. In addition to his jury trials, his litigation and negotiation skills have earned him very favorable settlements in numerous car accident, slip and fall and workers' compensation cases. Attorney Pappas has also successfully tried numerous Federal Civil Rights lawsuits in the United States District Court for the District of Massachusetts.

His courtroom experience, legal knowledge, energy and personal commitment to his clients are what provides those people injured in serious accidents the kind of legal representation they need so that they are in the best position to get the financial compensation they deserve for their damages and losses.

Excellent Reviews from Clients and Peers

Attorney Pappas has been rated by Avvo a perfect 10 out of 10 and named as a "Top Attorney" in Massachusetts based on his exceptional legal representation and successful verdicts and settlements.

For the third year in a row (2018-2020), Attorney Pappas was selected by The American Institute of Personal Injury Attorneys as one of the 10 Best Personal Injury Lawyers inMassachusetts for Client Satisfaction. After being nominated, Attorney Pappas passed a thorough selection process that included a detailed research of his casehandling, client relationship and overall success in the legal field of personal injury. This award recognized Attorney Pappas’ relationships and reputation among his clients. For examples, see the many Google Reviews for Attorney Pappas as well as the Client Testimonials by his clients.

Attorney Charles S. Pappas was also inducted into The National Trial Lawyers: Top 40 under 40. This organization is comprised of America’s top trial attorneys 40 years of age and under and is extended exclusively to those attorneys who exemplify superior qualifications, trial results, and leadership as a Civil Plaintiff trial lawyer.

Chuck Pappas grew up in Massachusetts and attended college at Clemson University.

Family is very important to Chuck. He has been married since 2006 to his beautiful wife, Misty, who he met at Clemson University. They have four wonderful children, three boys and one girl. He loves spending time with his family. They really enjoy camping together and being involved in all types of sports.

Chuck has a real passion for football. He played football throughout his life from youth football to semi-professional football.

"Football has taught me a lot of invaluable life lessons, including discipline, respect and effort, that have helped me become the lawyer I am today."  - Chuck Pappas

He is still very much involved in the game of football. He is the head football coach for his sons' Natick youth football team. Chuck is also a member of the board of directors for Natick Youth Football and loves giving back to the community. Chuck is a huge New England Patriots and Clemson University Tigers fan.

Matthew Helser
Attorney Pappas was incredible to have on my side. The amount of knowledge he has on every type of case was extremely valuable. He answered all my calls and emails in a timely manner. If you want anyone to represent you with your case absolutely reach out to him first.
Written by: Matthew Helser
Mahaney & Pappas, LLP
Date published: 05/03/2018
5 / 5 stars
Overall rating: ★★★★★5 based on 29 reviews