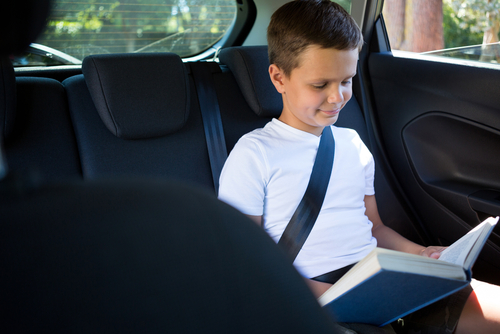 I was at one of my child’s sporting events recently and was brought into a conversation about children and seat belts. Some of the parents were discussing whether their children were still in booster seats or could use the regular seat belts in the car. They also discussed whether they let their children ride in the front seat of their cars. Most of them had different opinions and very few knew whether there was a law on this issue in Massachusetts. These parents know that I’m a personal injury attorney, so they wanted my opinion about children and seat belts.

Without a doubt, all children should be properly secured in a child restraint or seat belt when riding in a car. The specific restraint (e.g., car seat, booster seat or regular seat belt) depends on the child’s age and height. As discussed below, car accidents pose a major risk of serious injury and death to children. Child restraints and seat belts offer significant protections to children in cars. And, yes, there is a law on this topic.

The Massachusetts Law for Children and Seat Belts

Once a child is older than 8 years old or is taller than 57 inches, they are not required to be in a child passenger restraint but must wear a seat belt. There are several exclusions to this law, such as a passenger in a school bus, which I will not get into here. If you want to know what the exclusions are, you should look at the general law. A violation of M.G.L. c. 90 §7AA is a civil motor vehicle infraction, which results in a fine.

As President John F. Kennedy once said, “Children are the world's most valuable resource and its best hope for the future.” As a parent of four children, I know how much focus and energy parents spend on, not only providing for our children, but protecting them from the many dangers in the world. Of course, kids are going to get hurt just being kids in falls, trips, horsing around and in sports. It’s part of being a kid. But one of the most dangerous activities for children, believe it or not, is riding in motor vehicles.

The Centers for Disease Control and Prevention (CDC) found that motor vehicle accidents and injuries are the leading cause of death for children in the United States. Their studies found that in 2016 over 700 children 12 years old and younger died in car crashes and well over 125,000 were injured. It may come as a surprise to some that 35% of the children ages 12 and under who were fatally injured in car crashes in 2016 were not buckled up.

The CDC also conducted studies on child injuries and deaths in auto accidents in Massachusetts. They found that between 2003 and 2012, 2,661 occupants of motor vehicles were fatally injured in Massachusetts. Many these accident victims were between the ages of one and thirty-four.

The disturbing statistics above should reinforce all our commitments to making sure our children are properly buckled up when riding in the car. The CDC advises that properly buckling children and requiring the use of seat belts can reduce the risk of serious injury and death in a crash by half.

To make sure a seat belt fits properly, it is recommended that the lap belt lie snugly across the upper thighs, not the stomach. The shoulder belt should lie snugly across the shoulder and chest, not across the neck of face. To make sure a seat belt is fitted properly, your child should be able to sit with their back and hips against the back of the seat and sit without slouching. Children should be able to bend their knees easily over the seat and be able to keep their feet flat on the floor.

What Can You Do if Your Child Is Seriously Injured in a Car Accident in Massachusetts?

It’s not something anyone ever wants to think about, but car accidents are very common. As stated above, motor vehicle crashes are the leading cause of serious injury and death among children. Serious injures often result in expensive medical bills, significant pain and suffering and, in some cases, permanent disabilities. Negligent drivers who cause an accident and injuries to another should be held accountable and an accident victim should be fairly compensated for their injuries and damages.

If your child was seriously injured in a motor vehicle accident, you have the legal right in Massachusetts to seek financial compensation for your child’s injuries and damages.  The process by which you can seek compensation is by way of a personal injury claim or lawsuit. If your family is unsure about what to do after an accident, a great start is to consult with an experienced Massachusetts personal injury lawyer.

An attorney who specializes in personal injury cases from motor vehicle crashes can evaluate your accident case and inform you about your rights and your child’s rights. They can also help advise you on the steps to take after an accident and explain what your accident case may be worth. A personal injury attorney will also work with the insurance companies to address the medical bills and protect your right to compensation.

In all personal injury claims from a motor vehicle accident, the injured party bears the burden of proving the that the other driver was negligent and their negligence caused the accident and your child’s injuries. Auto insurance companies, however, often make it difficult for car crash victims to get the compensation they deserve. For example, sometimes an auto insurance company may try to blame the injured party or the driver of the car the injured party occupied at the time of the crash for causing or contributing to the accident. This is the contributory or comparative negligence defense. This would allow them to refuse or reduce any compensation they may otherwise be obligated to pay to an accident victim. In cases with a child who was injured in crash, but was not properly buckled up, M.G.L. c. 90 §7AA provides that a violation of this law shall not be used as evidence of contributory negligence in any civil action. This is an important part of the statute that should be well understood for personal injury cases involving a child and an alleged seat belt violation.

While there are many other aspects of personal injury cases from car accidents, a great start is to speak with a qualified and experienced attorney. Don’t let your child or family be a victim twice.