Tips for Driving Safely in the Rainy Weather in Massachusetts 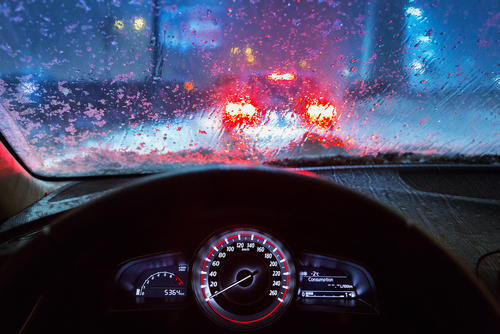 It may not feel like it yet, but it is Spring here in Massachusetts. It’s probably not the Spring we were all hoping for, especially after a long cold, snowy winter. Most of us prefer warm weather and plenty of sunshine. Unfortunately, we have had many days of rain and cooler than normal temperatures. Sure, the rain is great for trees, plants and our lawns, but the rain can present dangerous conditions for drivers and others on the roadways.

Bad weather is almost always at the top of the list of causes of car accidents. While many believe snow and ice rank at the top, statistically, rain is often the leading contributor and the major cause of many motor vehicle accidents in Massachusetts and across the country. Below are some reasons why rain contributes to crashes and some tips to safely drive in the rainy weather.

According to data compiled by the National Highway Traffic Safety Administration, dangerous weather conditions have been found to cause approximately 7,000 fatalities and nearly 450,000 serious injuries in car accidents each year across the country. Even though most of us would guess that snow and ice are the leading cause of car crashes, especially in Massachusetts, a study conducted by the Auto Insurance Center found that rain caused more fatal auto accidents than snow in 39 out of 50 states in the U.S.

Below are two major hazards that rain create on the highways and roadways in Massachusetts:

Rain Limits Visibility: The rain often decreases drivers’ visibility. It’s not only the rain falling that impact visibility, but it is also the water coming off the cars and trucks in front of us on the roads and highways.  I’m sure we all know what it’s like to be behind a tractor trailer on the Mass Pike or I-93 in Massachusetts when it’s raining. The water and mist coming off the trailer trucks can be blinding. Poor visibility creates a very dangerous condition and can cause drivers to be unable to see other cars or pedestrians on the road. Even though you may have your windshield wipers on, your visibility is limited. It is worse when your windshield is dirty and the dirt mixes with the rain and is then smeared on the windshield.

Rain Create Slippery Conditions: It shouldn’t come as a surprise that the rain makes the highways and roadways slippery. The roads are generally more dangerous when it first begins to rain due to the rain mixing with oils and other greasy substances on the surface of the roads and highways. The slippery conditions make it hard to stop or make a defensive maneuver in the event of an emergency on the road.

Safety Tips for Driving in the Rain

With all the rain we have gotten and are expected to get this Spring in Massachusetts, we should all take a minute and consider some tips for safe driving in the rain. Being seriously injured in a car accident can be a traumatic experience and the consequences can be life changing. Following these tips can help keep you, your passengers and other drivers and pedestrians on the roadways safe.

Drive Slower: In most accidents, the major cause of car crashes in the rain are drivers that were driving too fast for the road conditions. When it’s raining, you should always slow down. Even though the speed limit may be 65 mph on the highway, that doesn’t mean you should drive 65 mph when it’s raining. In fact, the laws in Massachusetts require drivers to decrease their speeds when weather conditions present a hazardous condition. Driving slower in the rain will help with traction and being able to avoid accidents in the event you need to make a sudden defensive maneuver.

Check Your Windshield Wipers: If you haven’t already, you should check your windshield wipers and make sure they are in good condition. Old windshield wipers in poor condition can cause poor visibility. They result in smeared windshields which do not allow a driver to see other cars or pedestrians on the roads. The cost of new windshield wipers are only a tiny fraction of the cost of medical bills that could result if you are seriously injured in a car accident.

Do Not Follow Too Close: When it is raining out, you should always keep a safe distance between you and the other vehicles in front. The rain creates slippery conditions and often results in drivers not being able to stop in time when an emergency arises. We have seen many rear-end car accidents that have happened in the rain, and many times it is because tailing drives are not able to stop in time because they may be following too close.

Avoid Water Puddles: When rainwater collects on the roads and highways it creates a dangerous condition that can lead to hydroplaning. Hydroplaning is when the tires of a vehicle lose traction on the road due to a layer of water between them. This often leads to uncontrollable sliding on the roadway and can cause drivers to crash into other drivers or pedestrians. Keep in mind, however, this tip should be followed only if you can safely avoid standing water. You shouldn’t swerve into other travel lanes to avoid standing water if it will impact other drives on the roads or highways.

Following all these tips together will help to keep you and others safe when driving in the rain. Unfortunately, not everyone drives safely in the rain or other poor weather conditions. This often leads to motor vehicle accidents and serious injuries. If you have been injured in a car crash in the rain, you should consult with an experienced Massachusetts personal injury attorney. Accidents that occur in the rain can result in the other driver or insurance companies raising liability issues. This is when an insurance company may blame you for causing the accident or for being comparatively negligent in the crash. This would limit the amount of compensation you may recover for the injuries and losses you suffered in the accident. Protect your legal rights and speak with an experienced lawyer.