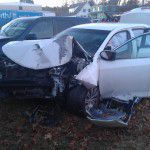 During the warmer months of summer, many Massachusetts residents leave their vehicles behind and walk or bicycle to their destination. Even in the colder months, especially here in Massachusetts, there are a number of pedestrians on the sidewalks and roadways.  A lot of people have to walk to the train, bus or work whether it’s snowing or not.  People who love to walk should be able to do so without the fear of being hit, injured or killed by a passing vehicle.

Nationwide, over 4,700 pedestrians were killed by vehicles in 2012, according to the National Highway Traffic Safety Administration. Nearly 100 of those deaths occurred in Massachusetts. While this is a significant decrease from the first recorded pedestrian fatality rate of 7,516 in 1975 by the NHTSA, Massachusetts officials continue to search for ways to raise motorist awareness of pedestrians and decrease the number of deaths that occur each year in the state.

Two common causes of motor vehicle collisions with pedestrians involve distracted driving and driver negligence. Although texting while driving is an illegal practice in the state of Massachusetts, many motorists still engage in the deadly practice, as reported by distraction.gov. Distracted driving increases the risk of auto accidents and pedestrian accidents.

In fact, a recent study conducted by Stimpson, Wilson, and Muelleman indicated that the number of pedestrians killed in distracted driving accidents has increased by 50 percent within a five-year period. Motorists who are engaged with other activities and are not focused on driving may not see an approaching pedestrian or stop properly at a designated crosswalk.

What is being done?

According to a study conducted by Smart Growth America, nearly 18 percent of pedestrian fatalities that occurred in the United States over a ten-year period took place in Massachusetts. The Massachusetts Department of Transportation announced the Bicycle and Pedestrian Safety Awareness and Enforcement Program and its hope of reducing biking and pedestrian fatalities by 20 percent within the next five years. MassDOT intends to accomplish this by:

New technology installed in many vehicles, including rear-view driver assist, is also thought to help decrease pedestrian fatalities nation-wide, according to 2013 preliminary data from the Governors Highway Safety Association.

Pedestrians who are hit by moving vehicles can suffer from life-threatening injuries. Some injuries are chronic and may affect the individual for the rest of their lives. An established attorney with training in pedestrian auto accidents can help people recover emotionally and financially after being involved in a devastating accident. Contact Mahaney Pappas today for your free consultation.