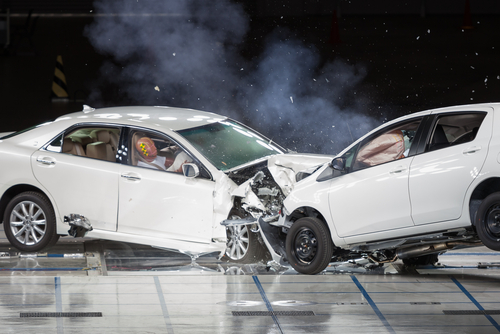 Head on crashes are amongst the most dangerous types of car accidents. While head on collisions are rare, they account for a higher probability of catastrophic or fatal injuries. It can be difficult to understand how a driver can be traveling the wrong way on the road or highway, but unfortunately, it is more common than you may think.

Because the injuries from these types of accidents can be extremely severe, drivers must be vigilant behind the wheel even when traveling on a divided highway or one-way road in Massachusetts. When serious accidents occur, an experienced, local car accident attorney or a wrongful death lawyer will be able to help you recover.

When traveling down a divided highway, drivers are understandably concerned with other drivers swerving out of their lanes or possibly being rear-ended by a tailing driver. The last thing most of us worry about is a car coming at us in the wrong direction. Similarly, when we are driving on a one-way street, we normally never expect for another car to be coming right at us.

Sure, in a perfect world this would never happen, but sadly head-on collisions on our Massachusetts highways and the many one-way streets do happen. When they occur, they can result in devastating consequences. Below are three reasons for head-on crashes caused by drivers going the wrong way.

With so much emphasis placed on intoxicated driving, this should not come as a surprise. Controlling alcohol-impaired driving has been a major focus of the Massachusetts government and police due to the devastating consequences it poses to innocent drivers and passengers on the roads and highways.

The Centers for Disease Control and Prevention citing a National Highway Safety Administration Traffic Safety data reported that approximately 29 people in the United States die in motor vehicle crashes every day that involve an alcohol-impaired driver. That is an alarming statistic.

Since alcohol intoxication can disrupt a driver’s focus and attention, sometimes an intoxicated driver can enter a highway going the wrong way. If you’ve ever driven the inner-city roadways in Boston, you are probably familiar with all the one-way streets. They can sometimes be confusing navigate. Intoxicated drivers may make a mistaken turn and head the wrong way on these one-way streets.

Distracted driving was also cited as a major cause of head-on crashes caused by drivers traveling the wrong way. Drivers can become distracted by their cell phones, radios, GPS devices, among many other things and enter a highway the wrong way or miss a one-way sign.

Sometimes, by the time a distracted driver realizes they are driving the wrong way, it’s too late. This is especially so when a distracted driver enters a highway using an exit ramp and then begins to travel at highway speeds (65 miles per hour). At those speeds, it’s difficult to maneuver out of harms way when there are drivers heading right at them at similar or greater speeds. Collisions at high rates of speeds often result in very severe or fatal injuries.

Risks of car crashes caused by a driver traveling the wrong way on the highway or roadways were reported higher amongst older drivers. It’s an unfortunate fact of life that as we age, our bodies begin to slow down and decline. This aging process can make operating a vehicle safely more difficult. The risks are even greater on highways like the Massachusetts Turnpike, I-95, I-93 and Route 9 in areas around Framingham and Natick as well as in major, busy cities like Boston and Worcester.

For example, cognitive and physical weakening and poor vision, especially at nighttime, can cause an elderly person to miss a roadway or highway sign and result in them entering a road going the wrong direction. An elderly driver may have a more difficult time quickly reacting to traffic conditions and unexpected dangers on the roads and highways.

While there is technically no maximum age limit to be a licensed driver in Massachusetts, our laws do include many conditions for elderly drivers to satisfy to help reduce the risks of elderly driving.

If you were seriously hurt in a head-on car crash caused by a driver going the wrong way, our Framingham injury legal team are here for you. Our experienced lawyers have 50 plus collective years helping accident victims recover the compensation they deserve after a serious car crash. We have a proven track record of success.

We understand the stress that injuries from a serious head-on collision can put on accident victims and their families. Our goal is to relieve most of the stress by dealing with the legal and insurance issues and requirements so that you can focus on recovering from your injuries and caring for your family.