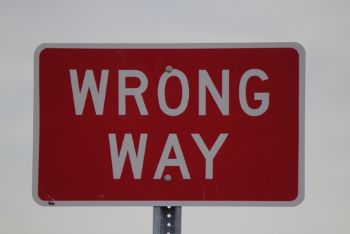 It’s hard to comprehend how drivers can travel the wrong way on highways or down one-way streets in Massachusetts, but, unfortunately, it happens. There are many reasons a driver may be traveling down the wrong side of the road or highway. Regardless of the causes, wrong-way drivers typically cause head-on collisions, which can result in serious crashes and catastrophic injuries.

Generally, accident victims who are severely injured in crashes involving a wrong-way driver may not face liability issues (i.e., determining who’s at fault for causing the crash) in their personal injury claims or cases. However, obtaining the compensation they deserve can sometimes be challenging. This is why injury victims should have an experienced Massachusetts accident attorney on their side to make sure they get the money they deserve for their injuries and financial losses these crashes cause. Our car accident injury lawyers in Framingham are experienced with this often catastrophic type of car wreck.

Driving the Wrong Way is a Growing Problem on Massachusetts' Roads

A report from AAA Northeast that came out in 2021 revealed that wrong-way drivers substantially increased on divided highways in Massachusetts since 2010. That report indicated that over approximately the past five years, more than 4,500 people were seriously injured in violent accidents. The AAA report cited over 8,200 wrong-way crashes in Massachusetts since 2010 on all roadways, not just divided highways. Most of the wrong-way crashes were reported to happen in Worcester, Springfield, Boston, Lowell, New Bedford, and Fall River.

Additionally, in Massachusetts the number of fatal crashes between 2015 and 2018 caused by driving in the wrong lane increased from 19 to 27 deaths. The number of reported deaths was also a significant increase from prior years.

Locally, our office has noticed an increase in driving in the incorrect lane. Recently, we represented a gentleman who was injured in a crash caused by a driver in the wrong lane on Interstate 495. Further, divided highways such as Route 9 and the Massachusetts Turnpike that run right through Framingham and Natick have also seen their share of drivers in the opposite lane.

But it’s not just the divided highways that are prone to wrong-way drivers. Our lawyers helped a woman receive substantial compensation in a wrong-way driver caused crash on a Framingham side street after a distracted driver crossed the double yellow line and caused a head-on collision resulting in serious injuries.

As stated above, liability is usually not a major issue in a wrong-way driver caused motor vehicle crash. In accident cases where liability is not a concern, the main issue is making sure the accident victim receives the compensation they deserve. Below is a summary of damages an accident victim may seek in an personal injury case:

In personal injury claims or cases where someone is injured in a car crash caused by another driver, reimbursement is sought for the medical bills incurred for treatment of the injuries suffered in the crash. The goal of personal injury law in Massachusetts is to make the accident victim whole. This includes compensating the injured party for the medical bills and out-of-pocket medical expenses the negligent driver caused.

In cases where an accident victims’ injuries prevent them from returning to work for a period of time after the crash, they may be entitled to compensation for the resulting wages they lost and were unable to earn. These are generally referred to as lost wages. Additionally, in serious crashes that cause severe, incapacitating injuries, an accident victim may seek compensation for their lost earning capacity if they are unable to return to work to earn the wages they were before the accident.

Someone injured in a crash caused by another driver may seek compensation for their pain and suffering from the crash and injuries suffered. This includes both mental and physical pain and suffering. Since these are non-economic damages, they are difficult to measure. This is where experienced personal injury attorneys can help since they will have a good understanding of how much pain and suffering are worth.

In cases where the accident victim suffers a debilitating, permanent injury, compensation may be obtained for the permanent impairment. Generally, a medical opinion and impairment rating as to a permanent disability is required. These are usually set forth in a medical narrative report an experienced injury lawyer will obtain prior to settlement negotiations or trial. As with pain and suffering, an experienced attorney will be able to determine the appropriate value of compensation for permanent injuries suffered in a crash.

While there are other subtopics of damages in a Massachusetts personal injury case, these are the most common damages sought by claimants or plaintiffs after an accident. Our qualified personal injury lawyers in Framingham, Massachusetts, with substantial experience helping accident victims will be able to determine the value of your injury case. They will also obtain the necessary substantiation for the compensation sought to make sure the injured person gets the money they deserve for their injuries.

Contact our Framingham car accident injury lawyers at 508-879-3500 or through the contact form on this page if you've been in an accident with a driver who was going the wrong way in your lane.