Which driver is liable in a rear-end crash? 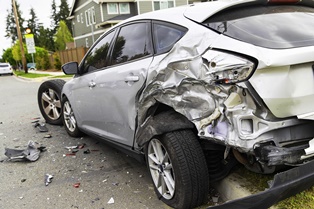 Most of the time, a car strikes another car from behind because the rear driver didn't allow a big enough following distance to ensure his ability to stop if the front driver slammed on the brakes. In these situations, the rear driver is determined to be negligent for not allowing an adequate following distance, regardless of the reason for the front driver’s sudden stop.

However, in the no-fault state of Massachusetts, negligence only matters in accidents that cause considerable damage and catastrophic injury.

When Fault Matter in a Massachusetts Car Crash

After a Massachusetts crash, you'll first file a claim under your own insurer’s personal injury protection (PIP) coverage. The total maximum benefit for PIP in Massachusetts is $2,000 for medical expenses and a maximum of $8,000 for all costs, including lost wages.

However, if you were seriously injured in the crash, the $2,000 from your PIP coverage will not likely be enough to cover your medical expenses. If the other driver was at fault for the crash that left you injured and they have insurance, you may be able to get additional damages from their insurance company. In order to sue for damages, your medical expenses must exceed $2,000, and your injuries must consist of a fractured bone, permanent and serious disfigurement, or substantial loss of hearing or sight.

If you were rear-ended, and you meet the criteria for a car accident lawsuit, your attorney has to provide evidence that the driver who hit you was negligent. In most cases, the rear driver in a rear-end collision is considered negligent, but the insurance company might try to claim one of the following to get out of paying you:

Whatever the cause of the rear-end crash, it will be your attorney’s job to refute these arguments to get the compensation you deserve for your losses.

Mahaney & Pappas Will Fight the Insurance Company on Your Behalf

When you have the car accident team from Mahaney & Pappas on your side, you can be sure every source of compensation will be pursued to secure the money necessary to recover from your serious injuries. Best of all, you won’t pay us a dime unless we're successful. Call us today to schedule your free consultations.