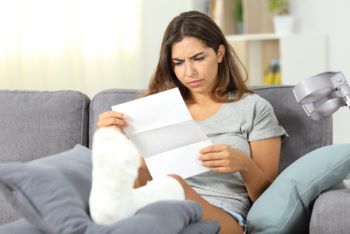 If there’s one thing that I’d bet we all have in common it’s that feeling we have when we get our mail and see those dreaded medical bills. It’s bad enough when those medical bills are for routine treatments or sickness but imagine how upset some get when they receive medical bills for treatments for an injury that was caused by someone else. That’s how victims of car accidents feel.

If you were injured in a car accident in Massachusetts and are either actively treating or have finished treatment and have received outstanding medical bills in the mail, do not ignore them. There is a common misconception that if you were not responsible for causing the car accident and your injuries that someone else or their auto insurer will pay them. That’s not really the way it works.

I cannot tell you how many times I’ve had to clarify that when someone is injured in a car accident in Massachusetts, the auto insurance company for the at-fault or negligent driver that caused the accident does not pay the injured party’s medical bills. Honestly, it does sound rational that they should, which is why it is a common misunderstanding, but technically they do not.

Here's how it works in a nutshell. Once the accident victim has recovered from his or her injuries or has reached a maximum medical improvement, their Massachusetts personal injury attorney will obtain all their medical records and bills and submit a demand for settlement to the negligent party’s insurance company. If everything goes well, a settlement will be reached. The settlement is where the at-fault driver’s insurance carrier pays money in settlement of the bodily injury claim to compensate or reimburse the injured party for his or her medical bills and expenses for treatment of the injuries suffered in the crash among other items of damages sustained.

The important thing to note is that this all happens at the end of treatment. This means that, theoretically, you, your auto insurer, and health insurance plan are responsible for paying the medical bills and expenses as incurred until a settlement is reached.

In Massachusetts, when a person is injured in a car crash, there are a few insurance companies that may be involved. When dealing with medical bills for treatment of injuries suffered in the crash, we look to the auto insurance company for the vehicle the accident victim was traveling in and their health insurance.

The car insurance company that insures the vehicle the accident victim was in offers certain benefits in Massachusetts known as Personal Injury Protection (PIP) benefits. These benefits are considered no-faut benefits and will be primarily responsible for the payment of medical bills. There are up to $8,000 of PIP benefits available, but the amount of PIP benefits accessible to cover medical bills depends on the type of health insurance the accident victim has. While PIP benefits in Massachusetts are considered compulsory, some car owners may elect a PIP deductible. However, taking a PIP deductible may not be a wise decision.

If PIP benefits are exhausted and health insurance does not cover certain treatments or portions of medical bills, unfortunately, they are your responsibility until you are able to reach a settlement in your accident case or claim.

What To Do With Outstanding Medical Bills Before A Settlement Is Reached?

A difficult issue to deal with aside from serious injuries, pain, and suffering, of course, are the outstanding balances and medical bills that keep coming in the mail. A lot of people, who mistakenly think the negligent driver’s car insurance will cover the outstanding medical bills, sometimes disregard the bills or throw them out. Please don’t do this and here’s why:

Our office was hired by a young woman who was injured in a t-bone type accident on Route 9 on the Framingham Natick line. It was determined that our client had the green arrow to turn left, and the other driver carelessly crashed into the passenger side of her vehicle. This woman suffered serious injuries in the crash and required ambulance transport to the emergency department in Framingham. During her months of treatment, she was receiving medical bills in the mail. She mistakenly thought that she wasn’t responsible for those bills and ignored them. One day, she received a letter from a collections company regarding those outstanding bills. Understandably worried, she contacted our office for help.

As you can see, ignoring these medical bills will likely cause them to be sent to collections, and no one wants outstanding bills to affect their credit score – especially when the bills were the result of someone else’s negligent actions.

If you were hurt in a car crash caused by a negligent driver and are receiving medical bills in the mail for treatment of the injuries you suffered in the crash, Framingham accident injury lawyers can help.

At Mahaney & Pappas, LLP, we regularly work with our client’s medical providers to address the outstanding medical bills. Many times, there may be additional insurance or remaining PIP benefits to cover balances of medical bills that health insurance does not cover. We often request medical providers to hold the outstanding balances until after the personal injury claim is settled or otherwise resolved and can sometimes set up a payment plans for the bills.

Regardless of the circumstances, if you were hurt in a car accident and are receiving medical bills for treatment, do not disregard or ignore those bills. Qualified and experienced accident attorneys can help you deal with those bills and protect your rights.