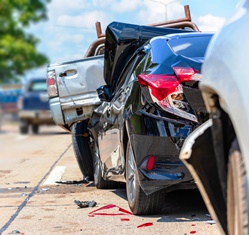 You’re driving along or stopped at an intersection, minding your own business, when “WHAM!” You're suddenly hit from behind. According to the National Highway Traffic Safety Administration, rear-end collisions are the most common kind of crash, accounting for 32 percent of all crashes in 2018. While many of these are minor fender-benders, some rear-end collisions are much more serious.

If you were seriously injured in a rear-end collision, the driver who hit you could be held responsible.

It makes sense that rear-end crashes are the most common kind of collision, given that we generally drive in single-file lines. If a driver fails to stop when they should, they'll hit the car in front of them. What would cause a driver to fail to stop in time? A number of things could be happening:

If you're forced to slow down or stop—or even if your driving pattern has not changed at all—and you're hit from behind, try to determine if one of these factors may have contributed to the cause of the crash.

Who's at Fault In a Rear-End Collision?

The rear driver is almost always considered to be the cause of a rear-end collision because they ran into the car in front. Even if the vehicle ahead stopped suddenly for no reason, the driver behind should have maintained enough following distance to avoid hitting it. However, to hold the driver liable for your injuries and other losses, you have to show that they failed to use proper and reasonable judgment and care in their actions.

In other words, you need to prove their culpability for causing the crash. Drunk driving, texting and driving, or violating a traffic law such as the speed limit could provide good support for a claim of negligence.

Our personal injury lawyers can help you deal with insurance companies, coordinate payments of medical bills, and pursue the best maximum financial settlement possible. This gives rear-end accident victims peace of mind and the ability to focus on healing. Contact our experienced Massachusetts car accident attorneys today for a consultation regarding your claim.