How can I prove that the driver who caused my crash was distracted? 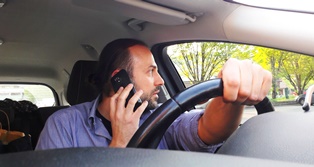 The other driver didn’t run a red light, wasn’t speeding, and wasn’t drunk. So what caused him to cross the center line and run you off the road? He probably took his eyes off the road to do something unrelated to driving, and that was enough time to get off-course. However, proving that’s what happened to hold him accountable for your injuries won't be easy.

Our knowledgeable car accident attorneys know how to locate the evidence needed to prove negligence. If you suspect distracted driving caused your crash, contact our team as soon as possible.

What Our Team Will Do to Prove Distracted Driving

To put together a convincing claim for damages with the at-fault driver’s insurance company, a personal injury attorney will gather evidence to prove their client’s actions clearly caused the crash. When distracted driving is suspected, the injured victim’s attorney takes the following steps to prove it:

If the evidence gathered by the injured driver’s attorney doesn't convince the at-fault driver’s insurance company to offer fair compensation, the next step might be to file a lawsuit.

It may not be easy to prove that a distracted driver caused the crash that left you seriously injured, but our personal injury team is experienced in accident investigations and will work hard for the compensation you deserve. Schedule your free consultation to discuss your options today.