Common Accidents That Occur During The Fourth of July 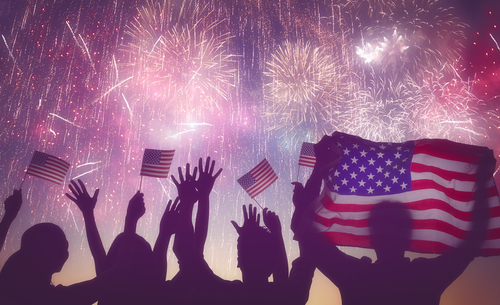 Independence Day is celebrated with cookouts, parades, family get-togethers, and, of course, fireworks. While it is a wonderful holiday to celebrate, it is also a holiday that results in serious accidents and injuries. Below is a summary of some of the most common accidents that occur on the Fourth of July. We hope that by reading this everyone is reminded to be careful and to have a fun and safe holiday.

Generally, speeding is one of the major and most common causes for car accidents and motorcycle accidents. Statistics indicate that a total of 108,554 car accidents were due to speeding from 2006-2015, which accounted for approximately 30% of all car crashes. In 2015 there were reportedly 10,000 speed related deaths with almost half of them happening on roads where the speed limits were higher than 55 miles per hour.

Over the Fourth of July holiday, everyone is excited about getting to their cookouts, family reunions, parades and/or firework displays that they may be distracted and in a rush, which often results in speeding. With so many cars on the highways during the holiday week, the probability of being injured in a car crash greatly increases. Remember to slow down and be careful.

Sure, most people enjoy a beer, glass of wine or a cocktail during the Fourth of July holiday. The problem is, however, that some people who enjoy their drinks then get behind the wheel and drive. This is very dangerous and is a major cause of auto accidents, generally, and especially over the holiday week.

The Center for Diseases Control and Prevention reported that drinking and driving has resulted in approximately 113,000 deaths in the United States over the past decade. The Insurance Institute for Highway Safety states that 40% of highway deaths between 2007 and 2011 were caused by drunk driving over the Fourth of July weekend. As we all know, alcohol impairs our ability to operate a motor vehicle safely and impacts our judgment and cognitive abilities.

With so many other driving options (i.e., designated drivers, Uber, public transportation), do not make the potentially tragic mistake and drink and drive.

The U.S. Coast Guard Auxiliary offers tips to stay safe this Fourth of July holiday, which include to always wear a life jacket; make sure your boat is properly equipped; be prepared for emergencies; do not mix boating and alcohol; and to keep a sharp lookout for other boats. These tips and using extra caution and common sense will help keep you, your passengers and other boaters safe this Fourth of July.

Some of the leading causes of firework accidents are malfunctioning or mishandled fireworks.

It has been reported by the U.S. Consumer Safety Product Commission that the most common injuries suffered in firework related accidents are the hands and fingers along with the head and face. Firework injuries range from burns to severed/amputated extremities and permanent disabilities,

If you are planning to set of some fireworks this Fourth of July, please be sure to handle them with care and look out for yourself and other bystanders when lighting off fireworks.

In our many years of representing people injured in accidents in Massachusetts, we have come across some tragic and horrific injuries.  You don’t want to end your holiday with serious and possibly permanent injuries. We urge everyone to be careful this Fourth of July and to enjoy the holiday with family and friends. Have fun!