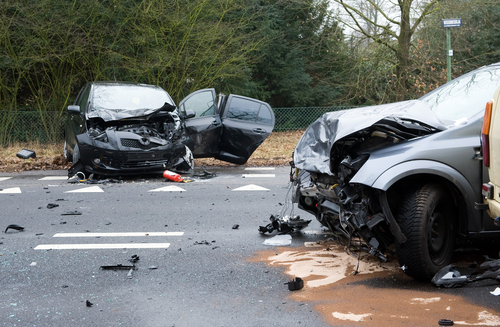 It seems like every day there are vehicles on the side of highways or roads in Massachusetts because of an accident. Thousands of people are hurt or fatally injured in car accidents across the country each year. Ranked as the third most densely populated state in the United States, Massachusetts has a lot of cars, trailer trucks, and motorcycles on the roadways and highways. The high volume of vehicles on the roads increase the probability of being injured in an auto accident. It was recently estimated that in 2016 there were 399 people were killed in motor vehicle crashes in Massachusetts, which is 13 % higher than the car crash fatalities in 2015.

It’s not only the number of vehicles on the road that increases the chances of being injured in an accident. There are many other contributing factors to motor vehicle accidents. Below I will address three major causes of auto accidents.

Speeding is still one of the major causes of motor vehicle accidents. The main reason that speeding contributes to accidents is that driving at excessive speeds reduces the driver’s ability to react to other vehicles, road or weather conditions. Also, there is a correlation between speeding and the more serious injuries suffered in car crashes. Common sense suggests that the faster a car is going at the time of impact, the higher the probability that the vehicle’s occupants may sustain a more severe injury.

According to the National Highway Traffic Safety Administration (NHTSA), in 2015, 9,557 lives were lost due to speed-related accidents. NHTSA considers an auto accident to be speed-related if the operator was charged with a speeding-related offense or if a police officer indicated that racing, driving too fast for conditions, or exceeding the posted speed limit was a contributing factor in the accident. Statistics have consistently shown that nearly 30% of all car accidents resulted from speeding.

We have handled numerous motor vehicle accidents where speed was a major factor in causing the crash. Sometimes it is the injured party, who is accused of speeding and causing the crash. Other times it is the other driver that is alleged to have been speeding and determined to be at fault for the crash. These allegations can cause serious issues in a personal injury case because it causes a dispute as to liability. Even if the injured person is accused of speeding, an experienced personal injury attorney will know how to skillfully advocate and fight for their client in order to get them the compensation they deserve.

Distracted driving has become a really hot topic. There are many states that have addressed cell phone use while driving and texting and driving by enacting laws that prevent such activities. Massachusetts banned texting and driving in 2010 and the Senate has passed a bill banning handheld electronic devices while driving. What drives (no pun intended) the push for laws to prevent distracted driving? Motor vehicle accidents, injuries, and fatalities.

In fact, statistics established that deaths from motor vehicle accidents increased last year in Massachusetts. Experts believe that auto accident fatalities have increased, in part, by drivers being distracted by cellphones and other electronic devices.

It shouldn’t come as a surprise that a major source of distraction while driving is cell phones. Statistics have shown that the number of cell phone-related car crashes have steadily increased over the past few years. Our office has noticed an increase in the number of personal injury cases from car crashes where cell phone use was noted as one of the major contributing causes.

Talking on a cellphone or texting while driving are not the only distractions that can lead to an accident. Drivers can become distracted by eating while driving, grooming themselves, and/or listening to their music too loud. As much as people want to do these things while driving, take it from us, those things can wait. We have seen horrific crashes that have changed the lives of individuals and their families forever. The consequences of distracted driving are far too great to take the risk of driving while distracted.

Lastly, drinking and driving is widely known as a major cause of motor vehicle accidents and injuries. The statistics are staggering. The Center for Diseases Control and Prevention has reported that approximately 28 people die in drunk driving accidents every day in the United States. The NHTSA has reported that in 2014 and 2015 between 30 and 40 percent of all traffic fatalities were related to alcohol-impaired driving.

The reason drunk driving increases the risk of car accidents is that alcohol impairs our judgment and cognitive abilities while operating a motor vehicle. Alcohol consumption affects our abilities to react in a timely and efficient manner while driving a car. Due to this, many drunk drivers fail to stop in time and cause rear-end collisions, or do not see the stop sign or red light and drive right through an intersection causing a t-bone crash, or swerve into the opposite side of the road causing a head-on collision.

No matter how a drunk driver causes a crash, the injuries from these accidents can be traumatic, devastating and permanent. We have personally witnessed the pain and frustration serious injuries from a drunk driving accident can cause the injured party and his or her family. The risks and consequences of drunk driving are so great that we urge everyone to be safe, especially where there are so many options available to people these days, including Uber, Lyft, and public transportation.

Just because someone was speeding, distracted or drunk and you think they clearly caused the crash and your injuries, don’t think for a minute that an insurance company will automatically pay you fair compensation. Insurance companies and their adjusters don’t just hand out money and will do everything they can to limit the amount they pay on auto accident cases or deny a claim for bodily injury.

This is why, if you are injured in a motor vehicle accident in Massachusetts, you should speak with an experienced accident attorney. A personal injury lawyer can help get you the compensation you deserve for your medical bills, pain and suffering, lost wages, and other damages and losses sustained.

To schedule a free appointment and case evaluation call us at (508) 879-3500 or contact us online. We are happy to help and answer your questions.