Large Commercial Trucks Pose Serious Hazards on Massachusetts Highways. There are Solutions that Could Reduce These Types of Accidents. 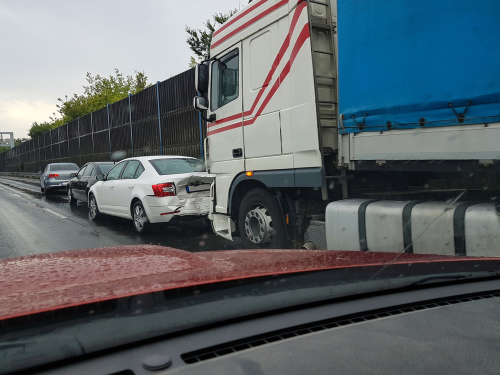 I recently read an interesting article on the prevalence of trucking crashes in the United States and some solutions that could help reduce or prevent deadly trucking crashes. In our line of work (personal injury cases), we come across many trucking accidents in Massachusetts. These types of motor vehicle accidents generally cause the most serious injuries due to the sheer size and power of trailer trucks and other large trucking vehicles.

In some situations, it is difficult to avoid being involved in an accident with a trucking vehicle. However, there are known solutions that, if implemented, could reduce the probability of trucking crashes. Technological advances in crash avoidance systems, for example, could help prevent trucking accidents or decrease the severity of damage and injuries caused in these types of crashes.

We all see large trucks, such as trailer trucks and tractor trailers, when driving on the highways and roadways in Massachusetts. I was driving to Boston the other day for a court hearing and was surprised by how many of these large trucks were on the highway. The article I read came to mind while I was driving. Of course, these trucks serve a major purpose in transporting goods to and from businesses and for other business-related needs. But the statistics establish a major concern for other drivers and passengers on the roadways.

Trailer trucks and other large trucking vehicles account for one out of every ten deadly motor vehicle crashes on our nation’s roadways. The Federal Motor Carrier Safety Administration’s 2016 Annual Large Truck and Bush Crash Facts found that there were approximately 475,000 crashes that involved large trucks. This statistic was for only police-reported accidents.  Out of these reported accidents, nearly 4,000 involved one or more deaths. The FMCSA Crash Facts also reported that most of the victims killed in these trucking crashes were drivers of other cars and pedestrians.

With the danger these trucks pose to other motorists on the highways and roadways as established by the Annual Large Truck and Bush Crash Facts, you must wonder whether something can be done to reduce the amount of trucking accidents and injuries. Below are some solutions that, if implemented, could significantly reduce these types of crashes and the major injuries or death that result.

There have been many studies over the years on the causes of trucking crashes.  Unsurprisingly, truck driver inattention and distracted driving were some of the major contributing factors to large truck crashes. Also, driver fatigue was noted as another cause of trucking accidents. Many of these large trucks are traveling long distances and have specific delivery time requirements, which may cause truck drivers to push through fatigue to meet these requirements. This often results in fatigued driving, which has been proven time and time again to pose a danger to other drivers on the roadways.

For example, our office represented an individual who was rear-ended in Auburn by a trailer truck whose truck driver was distracted and failed to notice the stopped traffic on the Massachusetts Turn Pike. In that crash, our client was seriously injured. The Massachusetts State Police responded and investigated the crash. Their investigation revealed that the truck driver failed to pay proper attention to the traffic, which was the cause of the accident.

The National Transportation Safety Board conducted a study in 1995 and found that driver inattentiveness was most often the cause of rear-end collisions involving large trucks. They noted that trailer trucks were three times more likely to be involved in rear-end crashes than regular passenger vehicles. Rear-end crashes involving trailer trucks were twelve times more likely to cause fatal injuries.

Large trucks can be equipped with lane departure warning systems.  This system would alert the truck driver when their truck begins to travel outside of its travel lane. There is also technology that would warn truck drivers of potential crashes. This is called the forward collision warning system. Additionally, in response to a possible accident, an autonomous emergency breaking system would automatically activate the truck’s breaking system without the truck driver’s effort.

These crash avoidance systems were studied by a large motor carrier and were found to significantly reduce the amount of crashes and the severity of the crashes. For example, the study revealed a 71% reduction in rear-end crashes. As a result of the development of crash avoidance systems and reduction in crashes when they are used, the NTSB recommended that the trucking industry implement these systems to help prevent or reduce the number of rear-end accidents caused by fatigued or distracted driving. The issue is that the use of these technological systems is only a recommendation, not a legal requirement. As a result, many trucking businesses have not willingly implemented these crash avoidance systems in their trucks.

Additionally, there are many things you can do as a driver to help avoid being involved in an accident with a large commercial truck.

If you are seriously injured in an accident caused by a commercial truck, you should follow the Three Important Steps to Take After an Accident. Seeking medical treatment, gathering evidence and documentation and not speaking with the truck’s insurance company are all important. However, while trucking accidents are similar to regular motor vehicle crashes, there are some major differences in the way they are handled. If you were seriously injured in an accident caused by a large commercial truck, you should also see the Tips to Follow After a Trucking Accident in Massachusetts.

Trucking accidnet cases can be very complex. Since truck accidents often result in permanent injury or death, the trucking insurance companies often mount a strong defense in contesting personal injury claims.  This is because serious injuries and fatalities often result in significant damages.  For this reason, personal injury claims from trucking crashes should be handled by a law office experienced in truck accident investigation, knowledgeable of federal and state trucking regulations, and that are experienced litigators. Many of these accidents result in lawsuits to pursue fair and just compensation. Knowing who to file a claim against or sue, what regulations they may have violated, and how to prove the trucking company is responsible are very important in trucking accident cases.

Having the right personal injury law office who is experienced in handling and investigation the often complex and serious truck accidents can make the difference in the amount of a settlement and compensation. This is why trucking accident victims should speak with an experienced, qualified Massachusetts personal injury attorney.