Snowbanks Can Cause Car Crashes in Massachusetts, But Who's Fault is it? 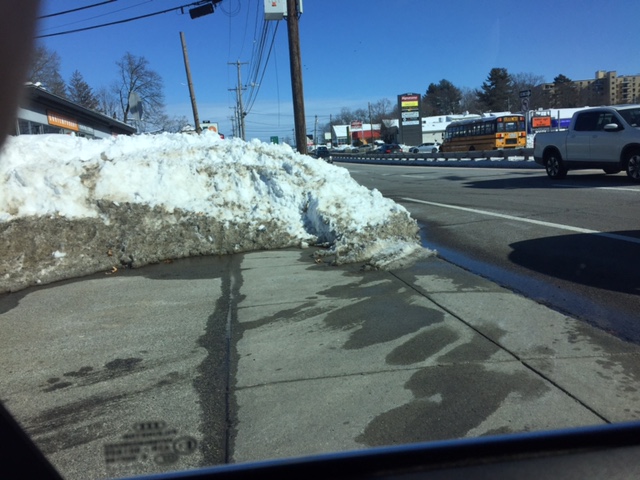 Large and dangerous snowbanks have formed after the recent winter snow storms here in Massachusetts.  Mahaney & Pappas, LLP has recently received calls, as we have in past winters, about injuries from car accidents caused by limited visibility due to high snowbanks. Injury claims from these kind of car crashes create a complex issue of liability. For this reason, it is highly recommended that you speak to an experienced personal injury attorney if you are injured in a car accident that may have been caused by a snowbank blocking the view.

Car crashes and pedestrian accidents are common during the winter months due to snowbanks.  As the winter progresses, so do winter storms and the size of snowbanks.  Snowbanks eventually get large enough to limit or obstruct a driver’s view.  Car accidents caused by a snowbank often occur when turning onto a main street.  High snowbanks cause drivers to inch out further into a street or intersection to see oncoming traffic in an attempt to merge onto a roadway.  This is causing an increased risk of danger to drivers and pedestrians. As you can see in the picture to the left, this snowbank is almost completely blocking the view of oncoming traffic on Route 9 in Framingham, Massachusetts. The speed limit on this particular road is 50 mph. A serious car accident could happen if a driver tries to merge onto the roadway without being able to see a car coming at 50 mph.

Injuries suffered in car accidents and the resulting financial expenses and costs are called damages.  These damages consequently accumulate medical bills and expenses, lost wages, and pain and suffering, for which an accident victim seeks compensation. An injured person, however, cannot recover money if they are found to have caused the accident. This is why liability must be addressed first.

Liability can be very complex when determining who was negligent and responsible for the accident and injuries caused, in part, by a snowbank blocking a driver’s view. In general, negligence is failing to take proper care when doing something.  Negligence determines liability.  So, is a driver legally considered negligent if their vision was obscured, due to a snowbank, when they hit another car? This can be a tough question to answer. The answer depends on many factors and must be determined on a case by case basis.

Another factor to consider when determining liability is whether the property owner of the parking lot with the snowbank may be responsible for a car accident for creating a snowbank that obstructs a driver’s view. In some situations, a property owner may use a snow removal or plow company to plow the snow in their parking lot.  The actions of the snow removal or plow company should be considered as they also may have contributed to the accident if they plowed the snow so high in an area that blocks a driver’s view of oncoming traffic.

As you can see, there are many factors that need to be evaluated and considered in determining who is at fault for the accident and injuries. There are many aspects of an injury claim and an experienced personal injury firm can help determine the necessary parties involved and negotiate the complex liability issues involved in an accident case in pursuit of financial compensation.