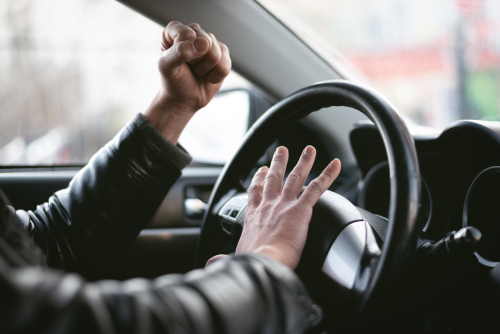 What is Aggressive Driving?

While it is probably well understood, aggressive driving is hostile behavior by an operator of a motor vehicle while he or she is driving. Driving a vehicle aggressively is very unsafe and can lead to serious crashes and severe injuries.

These type of driving tactics are very dangerous to other drivers, the aggressive driver and passengers in all cars involved. Aggressive driving is also commonly associated with distracted driving. When an aggressive driver is yelling at another driver on the highway, he or she is most likely taking their attention away from the road and other traffic. This distracts the driver from the safe operation of the vehicle.

Dealing with an Aggressive Driver

Be sure to manage your own behavior and responses to an aggressive driver. We’ve all hear the phrase “two wrongs don’t make a right”. Well, that applies to dealing with an aggressive driver. Because another person is driving aggressively is no justification for you to act in the same manner. When confronted by an aggressive driver, remain calm and focus on safe driving. Remember, your safety and the safety of your passengers and other drivers is paramount to letting the aggressive driver know how upset you are with his behavior.

Also, when you are confronted with an aggressive driver, it is best to avoid eye contact with them and refrain from making any unpleasant hand gestures. If you need to use your horn, try to just tap it as opposed to laying on the horn, which will most likely only upset the aggressive driver further.

If you are unable to get away from an aggressive driver and feel threatened, you should call 911 and report it.  If there is a passenger in your vehicle, ask them to write down the license plate number. Most times, however, just getting away from the aggressive driver should calm things down.

Be Prepared if You Are Hurt in a Motor Vehicle Accident

Unfortunately, car accidents and injuries happen. Being injured in a car crash is one of the last things we expect but is a possibility every time we get into a vehicle. It is always better to be prepared and know what to do if you are hurt in an accident. If you or a loved one are seriously injured in an accident and you are not sure what to do, you should educate yourself on personal injury claims that arise from motor vehicle accidents.

A great start is to review the Three Important Steps to Take after a Car Accident in Massachusetts. A summary of these crucial steps are:

Call 911 after a car crash. This will summons the police and an ambulance for anyone who has been hurt in the accident. The police generally prepare a motor vehicle crash report that will document the scene and witnesses that will be helpful later on in a bodily injury claim.

Do not to speak with the other driver’s insurance company. If you are seriously injured in a car accident and incur significant financial losses as a result, you will be seeking to be compensated from the other driver’s auto insurance company. Insurance companies always try to speak to accident victims right away after a crash and get a statement. The adjusters from these insurance companies are trained to take statements and illicit certain responses from accident victims that can be used against them later to either deny their bodily injury claim or attribute some portion of fault to them in order to reduce the amount of money they may pay out.

You should always speak with an experienced Massachusetts personal injury lawyer. An attorney, who is familiar and experienced in handling car accident cases, can help accident victims avoid the many pitfalls that someone can fall into that can hurt their claim. A lawyer can also properly advise an injured party on what should be done and what should not be done in pursuit of compensation for injuries. Most of all, a personal injury lawyer can help protect the rights of their clients and fight to get them the money they deserve.

At Mahaney & Pappas, LLP, we have nearly 50 years of combined experience helping accident victims get the money they deserve for injuries and losses they suffer in car accidents caused by negligent drivers. Joe Mahaney & Chuck Pappas give personalized attention to each and every client and take an approach to address all factors and variables that may impact the value of a personal injury case all with the goal of getting our clients the money that they deserve.

If you’ve been seriously inured in an accident, we are here to help. Don’t forget, we offer contingent fees, which means you pay us nothing unless and until we get you financial compensation for your injuries.