A Marlborough Resident Receives $135,000 in Compensation After a Slip & Fall on Hazardous Ice in an Apartment Building Parking Lot

A mother of four and resident of Marlborough, Massachusetts received $135,000 in compensation for a fractured ankle suffered in a slip and fall on dangerous ice left untreated in the parking lot of a residential apartment building. Local Slip and Fall Attorney Chuck Pappas was instrumental in obtaining the settlement through thorough discovery and the use of experts. 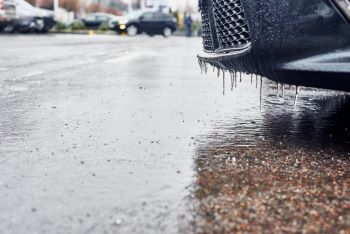 How the Accident Occurred

On an early Friday morning in March, our client left her apartment unit to take her daughter to school. Our client walked down the exterior steps of the apartment building and when she reached the parking lot, she slipped and fell on ice that had formed at the base of the exterior steps.

Our client was in immense pain from the fall and her left ankle had an obvious deformity. Her daughter called 911 and an ambulance quickly arrived at the apartment building. She was rushed to the local emergency department.

Overview of Injuries and Damages

When our client arrived at the emergency department, x-rays revealed that she had suffered a displaced trimalleolar fracture of her left lower leg. The trimalleolar is the lower leg sections that form your ankle joint. The fracture was severe, and the on-call orthopedic surgeon recommended immediate surgery. An open reduction internal fixation surgical procedure was performed on the same day. This is a surgical procedure that uses hardware (e.g., titanium plate and screws) to stabilize the broken bones.

Following months of physical therapy, our client continued to experience pain, discomfort, and decreased range of motion. Her orthopedic surgeon then recommended a second surgical procedure to remove the hardware that was used to stabilize the bones in the first operation.

After this client was discharged from the emergency department, she contacted the Framingham slip and fall injury lawyers at Mahaney & Pappas, LLP.  Attorney Pappas went to this client’s home to meet with her and discuss her accident. This was important as it allowed Attorney Pappas to not only meet with this client right away but also to physically inspect the area where the client fell. Photographs were taken of the location of the fall, which proved to be significant in the case. Two important pieces of evidence were the gutter downspout located at the base of the steps where our client fell and a pile of snow that has been plowed up against the back of the building right next to the location of the accident.

The general liability insurance carrier initially denied liability and Attorney Pappas immediately filed a civil lawsuit. During the initial stages of litigation, evidence revealed that the landlord had retained an individual to plow the apartment parking lot during the winter months.

Upon obtaining this information, Attorney Pappas amended the lawsuit to include the plow contractor as a defendant alleging that the plowing was performed negligently which contributed to the ice formation at the base of the steps.

Expert Witness was Influential in Establishing Liability for Slip and Fall

Attorney Pappas hired a certified construction engineering expert to review the evidence and inspect the apartment building. The photographs taken days after the fall revealed that the gutter downspout discharged roof water from the melting snow on the building’s roof right at the base of the steps. This roof water would then freeze overnight causing dangerous ice to form at the base of the steps. Our expert concluded that the gutter downspout located adjacent to the exterior staircase was in violation of Massachusetts Building Code.

Additionally, a medical expert was retained to author a medical narrative report. This is a specialized medical report that summarizes the injuries, treatment, prognosis, and any impairment or disability an injured person sustained in an accident. This medical narrative was also influential in substantiating the extend of our client’s injuries and in obtaining a fair and just settlement.

Offered Settlement More Than Doubled By Our Personal Injury Attorney

All the parties to this lawsuit agreed to mediation months before the trial. The collective settlement offers from both defendants totaled $60,000 at mediation. We determined these settlement offers to be low and not fair compensation for the injuries and pain our client suffered.

Settlement discussions continued throughout the end of litigation. In the days before trial, Attorney Pappas successfully negotiated increased settlement offers from both defendants totaling $135,000, which was determined to fairly compensate our client for her damages including her injuries, medical bills, lost wages, and pain and suffering.

Speak With An Experienced Massachusetts Slip and Fall Lawyer Today

If you have been injured in a local slip and fall accident, our Massachusetts slip and fall injury lawyers are here to help and fight to get you the financial compensation you and your family deserve. We understand the stress of dealing with rescovery, both physically and financially, and can help guide you through the personal injury claim process to take the immediate action needed on your case. If you, or a loved one, has been injured in an accident, please contact us online or call (508) 879-3500 to schedule a free case evaluation.